WHAT IS HAPPENING IN THE VIRGINIA GENERAL ASSEMBLY? — PART 3 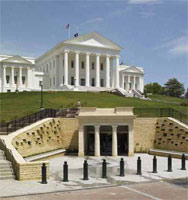 The big news out of the General Assembly is that Governor Bob McDonnell signed off on HB 5005 House of Delegates and Senate districts; changes in boundaries. The Redistricting Plans maps are provided here. What’s in the news?

What Virginia’s Blogs Had To Say

In Pr. William sends redistricting map to DOJ for approval The Virginia Politics Blog reminds us that Prince William County is itself subject to redistricting. Make certain you check out www.pwcgov.org/redistricting.

In McDonnell signs redistricting maps, Moonhowler admits she finds the profusion of plans and the outrageous gerrymandering confusing.

Black Velvet Bruce Li offers an apt observation, Gerrymandering Is OK If Parties Agree How To Do It.

Virgina Virtucon complains about the gerrymandering in a Governor McDonnell will sign new redistricting plan.

This entry was posted in Legislation. Bookmark the permalink.

1 Response to WHAT IS HAPPENING IN THE VIRGINIA GENERAL ASSEMBLY? — PART 3