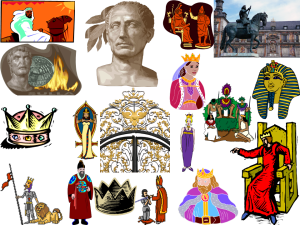 Because all the nations about them had powerful kings, having the Prophet Samuel anoint a king must have seemed like a great idea. Yet as God explained to the prophet Samuel, they had made a bad choice.

10 Samuel told the people who were asking him for a king everything that the Lord had said to him. 11 “This is how your king will treat you,” Samuel explained. “He will make soldiers of your sons; some of them will serve in his war chariots, others in his cavalry, and others will run before his chariots. 12 He will make some of them officers in charge of a thousand men, and others in charge of fifty men. Your sons will have to plow his fields, harvest his crops, and make his weapons and the equipment for his chariots. 13 Your daughters will have to make perfumes for him and work as his cooks and his bakers. 14 He will take your best fields, vineyards, and olive groves, and give them to his officials. 15 He will take a tenth of your grain and of your grapes for his court officers and other officials. 16 He will take your servants and your best cattle and donkeys, and make them work for him. 17 He will take a tenth of your flocks. And you yourselves will become his slaves. 18 When that time comes, you will complain bitterly because of your king, whom you yourselves chose, but the Lord will not listen to your complaints.”

A king assumes complete and total control of a society. What a king wants, the king gets. Because a king has complete authority, no one can deny him. But the people would not listen to Samuel. So God punished the people by giving them what they had demanded. Thus, Samuel anointed Saul, and the people were pleased — at first. The people did not know Saul only looked and acted the part of a king. Saul was a prideful man. Eventually, Saul’s disobedience to God’s expressed commands caused God to replace him. Then at God’s direction Samuel anointed a different kind of man, David. Unlike Saul, in addition to looking and acting like a king, David had the heart of a king.

With the contrast between these two kings, Saul and David, God showed the people of Israel the difference between what we can do and what God can do. God can see into a man’s heart. Only God has the wisdom to select the best man to be the king.

Even though God can look into a man’s heart, there remained an unavoidable problem. Even the best man is not good enough to be king. Even the best of men — even David sinned. Thus, David acquired many wives and fathered many sons, and one his sons, impatient with his father, started a civil war. Latter kings, even Solomon, the wisest man who ever lived, also gave in to the temptation of sin. Therefore, Israel suffered as God had predicted. Worst, as latter books in the Bible record, evil kings led the people to sin.

What is the lesson for us? Unlike the Israel of Samuel’s day, we do not have a theocracy. God does not rule our nation directly. However, that does not prevent from asking our Lord to lead us as individuals. We can insist that religious freedom — freedom of conscience — is respected and protected. Then we may each choose as individuals to be ruled by God. Then, in choices we make every day, we can ask God to guide us.