THE CONSEQUENCES OF MORAL BLINDNESS 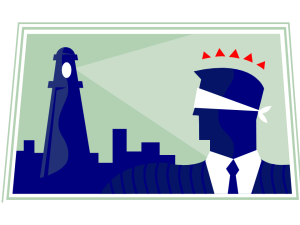 What does it mean to be morally blind. When you hear these words in Amazing Grace, do you understand what they mean?

Amazing grace! How sweet the sound
That saved a wretch like me.
I once was lost, but now am found,
Was blind but now I see.

Blind. The term occurs often in the Bible. Consider how Isaiah used it.

“Listen, you deaf people!
Look closely, you that are blind!
19 Is anyone more blind than my servant,
more deaf than the messenger I send?
20 Israel, you have seen so much,
but what has it meant to you?
You have ears to hear with,
but what have you really heard?”

21 The Lord is a God who is eager to save,
so he exalted his laws and teachings,
and he wanted his people to honor them.
22 But now his people have been plundered;
they are locked up in dungeons
and hidden away in prisons.
They were robbed and plundered,
with no one to come to their rescue.

23 Will any of you listen to this?
From now on will you listen with care?
24 Who gave Israel up to the looters?
It was the Lord himself, against whom we sinned!
We would not live as he wanted us to live
or obey the teachings he gave us.
25 So he made us feel the force of his anger
and suffer the violence of war.
Like fire his anger burned throughout Israel,
but we never knew what was happening;
we learned nothing at all from it.

The Lord exalted his laws and teachings, but his people did not pay attention? Deaf? Blind? God allowed His people to be plundered, locked them in dungeons, and made them feel the violence of war just for not paying attention? How could a loving God do such a thing? Because His people had sinned greatly and they refused to repent, God wanted His people to understand the magnitude of their blindness and the depth of their sin.

When John Newton (July 24, 1725 – December 21, 1807) wrote Amazing Grace, because he had sinned greatly he understood what it meant to be blind to sin. Even after Newton had experienced slavery, Newton participated in the slave trade. Even after Newton had accepted Jesus as his savior, Newton participated in the slave trade. In fact, Newton did not renounce the slave trade until long after he had retired from it and was serving as an Anglican priest. Then he published Thoughts Upon the Slave Trade.

If you wonder why the blacks submitted to enslavement, then I suggest reading Newton’s thoughts on the matter. Here is an excerpt.

Sometimes, when the slaves are ripe for an insurrection, one of them will impeach the affair; and then necessity, and the state policy, of these small but most absolute governments, enforce maxims directly contrary to the nature of things. The traitor to the cause of liberty is caressed, rewarded, and deemed an honest fellow.. The patriots, who formed and animated the plan, if they can be found out, must be treated as villains, and punished, to intimidate the rest. These punishments, in their nature and degree, depend upon the sovereign will of the captain. Some are content with inflicting such moderate punishment as may suffice for an example. But unlimited power, instigated by revenge, and where the heart, by a long familiarity with the sufferings of slaves, is become callous, and insensible to the pleadings of humanity, is terrible!

I have seen them sentenced to unmerciful whippings, continued till the poor creatures have not had power to groan under their misery, and hardly a sign of life has remained. I have seen them agonizing for hours, I believe for days together, under the torture of the thumbscrews ; a dreadful engine, which, if the screw be turned by an unrelenting hand, can give intolerable anguish. There have been instances in which cruelty has proceeded still further ; but, as I hope they are few, and I can mention but one from my own knowledge, I shall but mention it. I have often heard a captain, who has been long since been dead, boast of his conduct in a former voyage, when his slaves attempted to rise upon him. After he had suppressed the insurrection, he sat in judgment upon the insurgents; and not only, in cold blood, adjudged several of them, I know not how many, to die, but studied, with no small attention, how to make death as excruciating as possible. For my reader’s sake, I suppress the recital of particulars.

Because we live in advanced age, instead of blind, we judge ourselves to be of high moral character. Yet just as in past eras, there are men of our time and of our nation blindly willing to find excuses for tyrannizing those they find at their mercy. If we are to avoid such self-righteousness, then we must remove our own blindfolds. We must seek the light provided by the Bible. We must measure our conduct against God’s laws and God’s teachings .