CAN PROGRESSIVISM BE AIMLESS AND STILL REPRESENT PROGRESS? 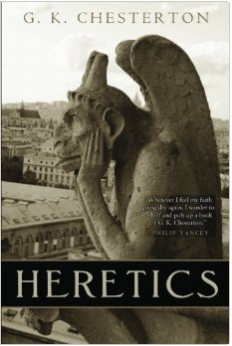 Cultures can seemingly change overnight, but I think the more significant changes — those based upon heartfelt beliefs — require decades.  So it is I have spent considerable time in recent years reading old books. I want to understand how we got in this mess. The human race is always in a mess, but each era has its own mess. Therefore, this mess is mine to understand and do what I can to improve.

One author I just recently discovered is G. K. Chesterton.  In just two of his books, Everlasting Man and Heretics, I have already found much to admire in Chesterton’s writing ability and wit. Here is an example, the subject of this post, from the end of Chapter 2 of Heretics.

The case of the general talk of “progress” is, indeed, an extreme one. As enunciated today, “progress” is simply a comparative of which we have not settled the superlative. We meet every ideal of religion, patriotism, beauty, or brute pleasure with the alternative ideal of progress—that is to say, we meet every proposal of getting something that we know about, with an alternative proposal of getting a great deal more of nobody knows what. Progress, properly understood, has, indeed, a most dignified and legitimate meaning. But as used in opposition to precise moral ideals, it is ludicrous. So far from it being the truth that the ideal of progress is to be set against that of ethical or religious finality, the reverse is the truth. Nobody has any business to use the word “progress” unless he has a definite creed and a cast-iron code of morals. Nobody can be progressive without being doctrinal; I might almost say that nobody can be progressive without being infallible—at any rate, without believing in some infallibility. For progress by its very name indicates a direction; and the moment we are in the least doubtful about the direction, we become in the same degree doubtful about the progress. Never perhaps since the beginning of the world has there been an age that had less right to use the word “progress” than we. In the Catholic twelfth century, in the philosophic eighteenth century, the direction may have been a good or a bad one, men may have differed more or less about how far they went, and in what direction, but about the direction they did in the main agree, and consequently they had the genuine sensation of progress. But it is precisely about the direction that we disagree. Whether the future excellence lies in more law or less law, in more liberty or less liberty; whether property will be finally concentrated or finally cut up; whether sexual passion will reach its sanest in an almost virgin intellectualism or in a full animal freedom; whether we should love everybody with Tolstoy, or spare nobody with Nietzsche;—these are the things about which we are actually fighting most. It is not merely true that the age which has settled least what is progress is this “progressive” age. It is, moreover, true that the people who have settled least what is progress are the most “progressive” people in it. The ordinary mass, the men who have never troubled about progress, might be trusted perhaps to progress. The particular individuals who talk about progress would certainly fly to the four winds of heaven when the pistol-shot started the race. I do not, therefore, say that the word “progress” is unmeaning; I say it is unmeaning without the previous definition of a moral doctrine, and that it can only be applied to groups of persons who hold that doctrine in common. Progress is not an illegitimate word, but it is logically evident that it is illegitimate for us. It is a sacred word, a word which could only rightly be used by rigid believers and in the ages of faith. (from here)

We can find some Chesterton’s books at our local library. Otherwise, we download them for free (even good audio versions). That’s the best thing about old books that are well on their way to becoming classics.