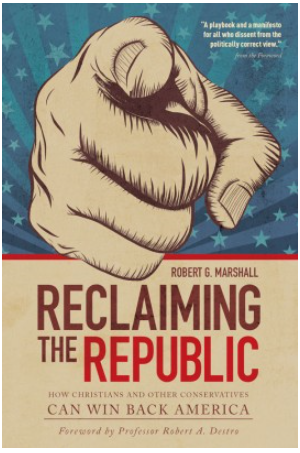 Here we continue with a review of Robert G. “Delegate Bob” Marshall new book, Reclaiming the Republic: How Christians and Other Conservatives Can Win Back America.

Chapter 1 begins the first Part of Marshall’s book. As Part 1 of this series of posts observed, Part 1 of Marshall’s book explains what the conflict is about and what we risk losing. Marshall doesn’t use the expression, but he is talking about that part of the “culture war” that involves the fight over control of our government. As its title suggests, Chapter 1 is about religious liberty. Here Marshall describes what that that expression meant to the Founders and how the Founders codified the protection of religious liberty in our Constitution.

What is Marshall’s focus? He wants us to understand that the Founders sought freedom of religion, not freedom from religion. To that effect he quotes Associate Justice of the Supreme Court Joseph Story. Here is how Marshall ends this chapter.

Story believed that the Judeo-Christian moral assumptions of Americans regarding government of the people were necessary to ensure the common good: “It is impossible for those, who believe in the truth of Christianity, as a divine revelation, to doubt, that it is the especial duty of government to foster, and encourage it among all the citizens and subjects. This is a point wholly distinct from that of the right of private judgement in matters of religion, and of the freedom of public worship according to the dictates of one’s conscience. The real difficulty lies in ascertaining the limits, to which the government may rightfully go in fostering and encouraging religion.”

Chapter 2 – Rolling Back Rule by Judges Or Just How Supreme Is the Supreme Court?

In all Cases affecting Ambassadors, other public Ministers and Consuls, and those in which a State shall be Party, the supreme Court shall have original Jurisdiction. In all the other Cases before mentioned, the supreme Court shall have appellate Jurisdiction, both as to Law and Fact, with such Exceptions, and under such Regulations as the Congress shall make. (from here (archives.gov) (Article III, Section 2))

To demonstrate Congress’ control over the Supreme Court, Marshall cites the Founders and gives examples from our history. To make it easy to follow, he organized Chapter 2 according to the following questions.

Interested in the answers to those questions? Then read Chapter 2.

1 Response to RECLAIMING THE REPUBLIC: A BOOK REVIEW — PART 3