THE EMPEROR HAS A NEW SET OF CLOTHES 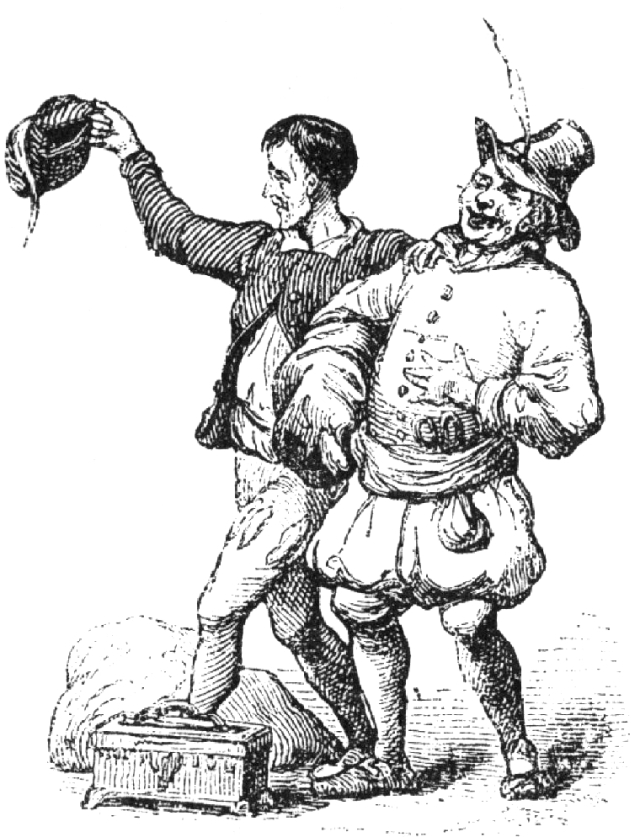 The two con men enjoying the success of their little caper (from here).

Once upon a time there lived an emperor who vainly loved wearing finely tailored clothes. In an effort to out-do himself, he hired two designers that said they could make the most beautiful and elaborate clothes he had ever worn. In reality, the designers were con-men who convinced the emperor they were using fabric so fine it was visible only to the elite and his whole-hearted supporters. Anyone else was either unfit for his job or hopelessly stupid.

All along, the designers just pretended to tailor the garments. At fittings, no one, not even the emperor or his ministers, could really see the alleged “clothes”, but they pretended they did for fear of appearing unfit for their positions.

At last the designers brought the finished suit to the palace and the emperor stripped to his bare skin. The fashionistas made an elaborate scene of dressing the emperor in his new outfit. When he was fully ‘attired,’ the king strutted through the city in a royal procession so all his subjects could admire him. Not wanting to appear as odd-balls or stupid, citizens along the route went along with the game. Finally, a kid in the crowd hollered, “He’s naked!” and everyone joined in his hue and cry. The emperor realized what they shouted was true, but he kept walking anyway.

That old Danish fairytale is being relived today, as gay activists weave a tale about a person’s biological gender, obvious at birth, being no longer correct. They contend that true gender is determined by how a person perceives one’s self at a given moment, not by a DNA test in a laboratory. In other words, hormones and genitalia are not clues to a person’s real gender. In so saying, they deny the apparent for the incoherent as being truth. They are trying to redefine reality.

They bring their “new set of clothes” to school boards, selling members on the assumption that if a child thinks he or she is not the gender identified at birth, the child is right. They must be called by the appropriate pronoun and be allowed in the bath or locker room of their ‘felt’ gender.

Moreover, con-men have sold some local or state governments on the idea that kids should be given hormones to change them to their desired gender, if that’s what they want, even without permission from the parents for the change in process. And, although adults in their right minds recognize how foolish the whole scenario is, they don’t challenge it, because the ‘designers’ call them names like homophobes or worse.

The New Testament says, “For even though they knew God, they did not honor Him as God or give thanks, but they became futile in their speculations, and their foolish heart was darkened. Professing to be wise, they became fools…” (Romans 1:21-22). When America voted God out of the schools by banning Bible reading and prayer, we put our country on this downward slope. When we began murdering babies in the womb by the millions, we opened the door to all the moral foolishness that is happening in our nation today.

But the tide is turning and each of us can have a part. When you vote in the Virginia elections on November 5, be certain you cast your ballot for candidates who are family-oriented, pro-life, and will protect those values in the execution of their public office. It’s what God honors. Above all, pray for our officials. Being a politician at any level is not easy, especially when con-men try to sell them a bill of goods that will leave them naked!

1 Response to THE EMPEROR HAS A NEW SET OF CLOTHES