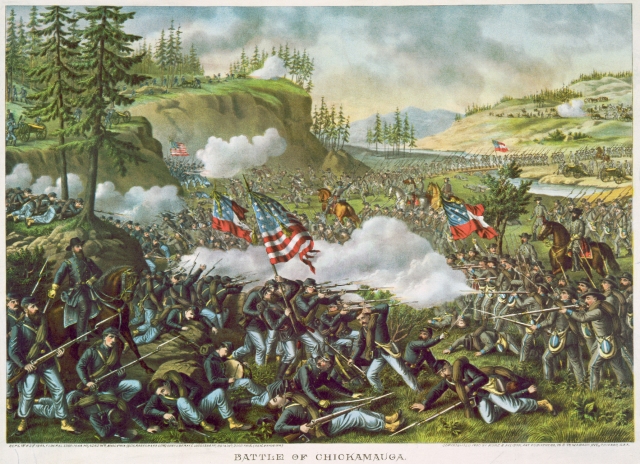 The Battle of Chickamauga, the highest two-day losses. (from here)

Civil war is the most hateful and costly kind of war. Why? The enemy knows us, and he knows he is unalterably opposed to us. He is already within our gates. He knows our strengths and weaknesses. He seeks our complete downfall, even our destruction.

What does civil war have to do with Socialism? Consider the moral principle upon which Socialism is built? Most Socialists borrow from Karl Marx.

Human Rights And The Purpose Of Government

We hold these truths to be self-evident, that all men are created equal, that they are endowed by their Creator with certain unalienable Rights, that among these are Life, Liberty and the pursuit of Happiness. –That to secure these rights, Governments are instituted among Men, deriving their just powers from the consent of the governed, (from here (law.indiana.edu))

“Experts” now refer to the rights identified in the Declaration as “negative” rights. Here is a brief explanation of the concept.

A negative right is defined as a right not to be subjected to an action of another human being, or group of people, such as a state, usually in the form of abuse or coercion. A positive right is a right to be provided with something through the action of another person or the state. In theory a negative right proscribes or forbids certain actions, while a positive right prescribes or requires certain actions. (from here (psychology.wikia.org))

What are “positive rights”? Consider President Franklin D. Roosevelt‘s Second Bill of Rights. Here is a summary of what Roosevelt offered.

How did Roosevelt justify a government guarantee of these rights? He used this line.

All of these rights spell security (emphasis added). And after this war is won we must be prepared to move forward, in the implementation of these rights, to new goals of human happiness and well-being.

As the result of the programs Roosevelt and others implemented to create “positive rights, now we cannot balance the budget, and the percentage of the budget dedicated to paying off interest is growing. In fact, our government’s budget has become so huge and unwieldy, we have lost control of it. In spite (or because of) of all those good intentions, something is going wrong. What?

What did the advocates for “positive rights”do? They just started implementing their wonderful programs and amended our Constitution by judicial fiat. Thus, without the due process required for a constitutional amendment, we have fundamentally transformed the character of our government.

Why can’t we trust politicians? Look in a mirror. You and I are the problem. We cannot trust each other. So, of course, we cannot trust any of the politicians we elect. Look at President Donald Trump and former President Barack Obama. The presidency is the highest office of our land, and presidential elections result in the highest voter turnouts. So, our presidents should be the people most honored by all of us. Nevertheless, whether a Democrat or a Republican wins, nearly half of the population thoroughly distrusts the winner. Why? Doesn’t each of us fear the politicians we don’t trust will take what we have and give it to their supporters?

What is the solution? We must learn to help each other cheerfully.

6 Now this I say, he who sows sparingly will also reap sparingly, and he who sows bountifully will also reap bountifully. 7 Each one must do just as he has purposed in his heart, not grudgingly or under compulsion, for God loves a cheerful giver. 8 And God is able to make all grace abound to you, so that always having all sufficiency in everything, you may have an abundance for every good deed; 9 as it is written,

“He scattered abroad, he gave to the poor,
His righteousness endures forever.”

If we want to protect each other’s rights, we must stop selling our votes to politicians. Government “charity” is not based upon love. Instead, politicians “redistribute the wealth” to buy votes.

What is to come?