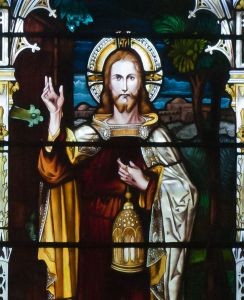 Detail on stained glass depicting Jesus: I am the light of the world, Bantry, Ireland. (from here)

What has the Holiday Season become to many of the people who lead us? Consider this Bible passage.

19 This is the judgment, that the Light has come into the world, and men loved the darkness rather than the Light, for their deeds were evil. 20 For everyone who does evil hates the Light, and does not come to the Light for fear that his deeds will be exposed. 21 But he who practices the truth comes to the Light, so that his deeds may be manifested as having been wrought in God.”

While the rest of us celebrate the Holidays and want to spend our time with family and friends, are our leaders busying themselves doing things they don’t want us to know about?

What else is happening we need to know about? Don’t you wish the news media would do its job and help us to find out? Unfortunately, most news outlets belong to big corporations. So it is impeachment all the time. Why? Most news outlets are part of the crony capitalist news network. Often, instead of reporting the news, they hide it. How are we suppose to do our civic duty if we don’t know what is going on? We cannot. Therefore, when we vote, we need to ask ourselves? Which candidate is most likely to do his deeds in the light?