YOUR PARENTAL RIGHTS ARE IN THE CROSS-HAIRS! 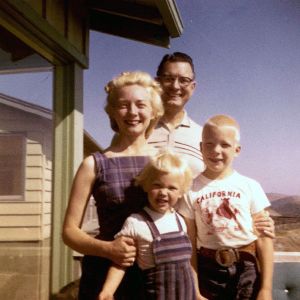 An American nuclear family composed of the mother, father, and their children circa 1955 (from here (en.wikipedia.org)). Note that this article includes a description of the debate over the value of the family.

Do you know why our current laws grant parents the right to raise their children according to their own beliefs and wishes? As far back as you look in US history, parents and families have been the foundation of our culture and society. But why?

Our founders were Bible-believing, faith-practicing, God-fearing men and women who established our Constitution and laws on the Bible. God began the first family with Adam and Eve, and, regardless of their personal failures and the consequences handed down to all of us, God put His emphasis on the family unit for teaching children to follow the same precepts as their parents did: faith in and obedience to God.

Early legislators in the founding colonies naturally enshrined the family unit and supported it with the laws they established. That has been the precedent in our nation ever since—until the middle of the 20th century or so. Then the tables turned when we threw out the Ten Commandments, and Bible-reading and prayer in school.

This many years later, adversaries of the family think our laws originated in Washington, not the Bible. They are dead-set on changing the laws to remove parental rights to their children.

James Dyer, professor at the College of William and Mary said, “The reason the parent-child relationship exists is because the State confers legal parenthood on people through its paternity and maternity laws” (https://parentalrights.org, “Gathering to Take Away Your Parental Rights”, May 24, 2020).  His reasoning leads thus: If we change the laws, we remove those rights and then WE own them.

If activists win their way, they will remove legal authority, medical power, and grant the right to remove children from the home at will, thus traumatizing both children and parents.

It isn’t so long ago that Hitler had his youth movement and transformed the children of Germany into puppets of the State. A child’s mind is plastic, moldable and trusting of the adults who teach them; they believe what they’re told.

(As an aside, TV also molds minds of adults who believe everything they see and spout it as though it’s Gospel truth. So, parents, be sure you’re not falling prey to being misled, as well.)

If you, as a parent, are not free to shape your own children to practice freedom according to what you believe, that freedom and those values may be taken away by our own children inculcated with false teaching by the State.

We’re in a war that is very serious and dangerous. We must protect our freedom, we must practice our freedom NOW or our neglect will seize it from us. “All that is necessary for the triumph of evil is that good men do nothing” (Edmund Burke).

When good men do nothing, the opposition has opportunity to move in and steal. We cannot afford to let down our guard! I was taught, perhaps you were taught, that there is a separation of church and state, and Christians ought not be involved in politics. WRONG!

It’s because too many of us believed that lie that our nation is being usurped from us. No longer!! We are rising up to take control of our freedom! NOW! Visit the Parental Rights web site and get involved. NOW!

Elections matter! Are you getting ready to participate in the choice of candidates for the Republican Party’s nomination? Check out:

1 Response to YOUR PARENTAL RIGHTS ARE IN THE CROSS-HAIRS!