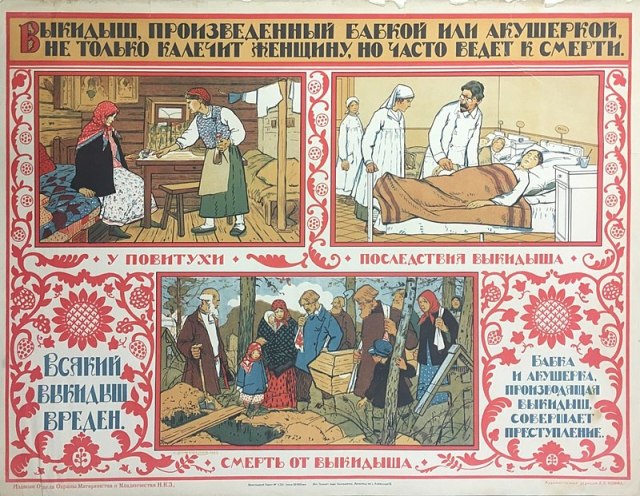 Soviet poster circa 1925. Title translation: “Abortions induced by grandma or self-taught midwives not only maim the woman, they also often lead to death” (from here (en.wikipedia.org)).
Because of the controversy over abortion, the regulation of abortion clinics is difficult. Hence, the picture above can be somewhat ironic.

Two women seeking abortions at the Clinics for Abortion and Reproductive Excellence (CARE) in Bethesda, MD, suffered grave complications on May 12 and 21, 2020. Each woman was rushed to a hospital in Rockville where they underwent surgery. Both were gravely ill when they were admitted.

Both women mentioned above were 25 weeks pregnant, meaning their babies approached the time when, though premature, they could have lived if born naturally. In each instance, Carhart (or an associate) perforated the woman’s uterus and shoved some or most of the dead baby into the mother’s  abdominal cavity through the resulting hole.

The woman on May 12 had so much damage to her colon ?from an instrument? that she had to have a resection and colostomy. Due to hemorrhaging, she also needed multiple transfusions of blood and remained in the hospital for nine days!

The victim on May 21 had to have a hysterectomy that prevents her from ever carrying another pregnancy. Her uterus was severely torn and she bled so heavily that she required four units of blood to survive. Her entire baby was shoved with seeming great force through the uterine tear into her abdominal cavity! The mother also was hospitalized for nine days for what should have been a ‘simple’ abortion!

CARE is owned and operated by LeRoy Harrison Carhart, Jr, who also has an abortion facility in Nebraska. Carhart has no hospital admitting privileges in either state. His is one of few clinics in the mid-Atlantic region that openly performs abortions throughout the nine months of pregnancy.

The CARE and its Nebraska ‘sister’ have a total of 21 emergencies since 2012, most of which required an ambulance transfer to a hospital. Who would ever trust going to either clinic or allow a loved one to do so?

Among those mishaps is the death of a 29-year old white female in 2013. On autopsy, the pathologist attributed her death to: “the presence of amniotic material in the blood initiating the coagulative/consumptive phase of DIC and resulting in dysfunction of multiple organs” (https://www.operationrescue.org/archives/whistleblower-2-women-suffered-gruesome-injuries-retained-baby-parts-emergency-surgery-after-late-term-abortions-in-maryland).

DIC stands for disseminated intravascular coagulation or blood clots in various organs. What has never been explained is how amniotic fluid from the uterus got into the patient’s blood stream. Dr. Carhart has never been held responsible for the woman’s death.

Because of his advancing age, it is believed Carhart brings in younger ‘abortionists-in-training’ to perform most or all of the abortions done at CARE. However, it was Carhart himself who placed the alert call to the hospital on May 21.

Maryland is one of eight states that allows the abortion of a baby regardless of gestational age. Fortunately, in Richmond that was proposed for Virginia, but did not gain legislative support. Do not believe it will not be reintroduced in the near future, however.

Many other abortion laws enacted to protect the unborn infant and mother were eradicated in Richmond in 2020. That means the abortion business can flourish in Virginia unimpeded by rules that require cleanliness and a 24-hour waiting period between a mother’s ultrasound of her baby and the scheduled abortion, so the mother can change her mind and keep her baby.

Election day is June 23. Yes, it’s a primary, but every conservative that cares about our country needs to step up to the plate and vote for pro-life candidates. If we don’t, do not believe the ‘other side’ will hesitate to further demolish the sanctity of life. Ours is a critical time! Act now!

Elections matter! Are you getting ready to participate in the choice of candidates for the Republican Party’s nomination? Check out: