WHEN DOES REFUSING TO ADMIT A MISTAKE BECOME EVIL? 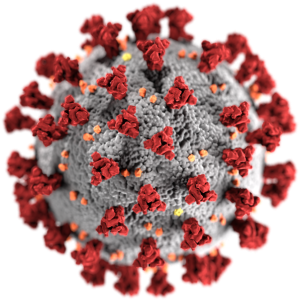 Illustration of the morphology of coronaviruses; the club-shaped viral spike peplomers, coloured red, create the look of a corona surrounding the virion, when viewed electron microscopically (from here (en.wikipedia.org))

Since I found Pro Lockdown Politicians Remain Stuck in March (freedomthroughempowerment.wordpress.com) worth repeating, I decided to double check a few things just to make certain the facts were right. One of that good lady’s key references includes this article, In The Lockdown Has Gone From a Mistake to a Crime (pjmedia.com) by Dennis Prager. Prager is quite angry with his governor.

I live in California, a state governed by that most dangerous of leaders: a fool with unlimited power. Despite the fact that California ranks 28th among the 50 states in deaths per million, Gov. Gavin Newsom has destroyed and continues to destroy tens of thousands of small businesses and untold numbers of livelihoods. His continuing to forbid — a half-year after the onset of the pandemic — indoor dining in restaurants is leading to a projected permanent closure of approximately 1 in every 3 restaurants in the state. (from here (pjmedia.com))

Why is Prager so certain the lockdown is wrong? Well, Prager is probably a bit too angry, but his reasoning is certainly worth considering. Prager asks us to consider the example of Sweden. Back in July we still were not certain that the Swedes had made the correct choice.  In Did Sweden’s coronavirus strategy succeed or fail? (bbc.com), the writer, Maddy Savage, wondered whether Sweden’s strategy would be a failure.

Just 45% of Swedes now have confidence in the government’s ability to handle the pandemic, according to a Novus survey last month, down from 63% in April.

Confidence in the Public Health Agency has also dipped, but remains at a much higher 65%, compared with 73% at the peak of the pandemic.

“We believe they have the right strategy, because nobody knows exactly how we should do it,” says holidaymaker Eva Britt Landin, 66, who’s having a socially-distanced lunch with her 102-year-old father at Lake Storsjorn,

But Catherina Eriksson, 42, who’s visiting from Stockholm, says the jury is still out. “We don’t know what things will look like in the autumn or next year. We’ll just have to wait and see.” (from here (bbc.com))

What did the Swedes do in response to the Coronavirus? Well, they did not lock down everything.

Sweden has largely relied on voluntary social distancing guidelines since the start of the pandemic, including working from home where possible and avoiding public transport.

There’s also been a ban on gatherings of more than 50 people, restrictions on visiting care homes, and a shift to table-only service in bars and restaurants. The government has repeatedly described the pandemic as “a marathon not a sprint”, arguing that its measures are designed to last in the long term. (from here (bbc.com))

Sweden even kept schools open for under-16s. Because the Swedish strategy has begun to look successful others have begun to notice.

A country whose coronavirus strategy was mocked by the rest of the world may be having the last laugh after recording an average of just one death from the disease a day.

Sweden infamously chose to ignore calls for heavy lockdowns and has kept most schools, bars and restaurants open throughout the pandemic.

While the Scandinavian nation’s death rate overall is one of the world’s highest – due to a huge spike at the beginning of the pandemic – the daily rolling average is now negligible.

That’s in contrast to Australia which is averaging 15 – 20 deaths each day. (continued here (nzherald.co.nz))

How many died in Sweden? Well, that BBC article, publish 23 Jul 2020, said that in a country of ten million 5,500 had died. That is serious, but Sweden decided to accept the punishment and get it over with. Because Sweden adopted a strategy that was voluntary, the Swedish people were able to focus on protecting the vulnerable, not people who were not at risk. Moreover, they reduced the harm, including lost lives, that comes with locking down the economy.

What price have we paid for the lockdown? God only knows. Just keeping our schools closed has caused no end of trouble.

Are you a parent? Why isn’t your child in school? Do you live in Prince William County. Why don’t you contact your representative on the School Board and ask them? Here is their contact information, School Board members (pwcs.edu).

When you contact your School Board member, please be polite. For the most part the people on the School Board are just trying to do what the experts they respect think appropriate. Unfortunately, this Coronavirus (COVID-19) has gotten way too political.

6 Responses to WHEN DOES REFUSING TO ADMIT A MISTAKE BECOME EVIL?